SPIRAL WORKSHOP 2009 > About the Program

Head of the Program: Olivia Gude

9 week course on Saturdays Mission Statement (de)Generate Painting Students are generally confined to their desks when making art in school; this hinders them from connecting their bodies with their artmaking. In the de(Generate) group, the students stood up and used the body as a tool for experiencing, painting and making meaning. These bold painters recognize the possibility and the importance of expressing oneself emotionally and physically through streaks, strokes, and splatters of paint.

de(Generate) youth artists were exposed to many artists who have worked in expressionist traditions—from Abstract Expressionist painting in the mid-20th century to the early and latter 20th century German Expressionist movements. The youth artists now recognize and appreciate many artists whose work is charged with emotional expressiveness, including Jackson Pollock, Gabriele Münter, Otto Dix, Roberto Matta, Kathy Kollwitz, Francis Bacon, Alice Neal, and Jenny Saville. All of these artists address subject matter and styles of significant cultural content¬–sexuality, individuality, aging, war, violence, self-inflicted repression, and the politics of oppression—subjects that are not normally talked about in high school art curriculum.

Once the youth artists had become immersed in and appreciative of expressionist styles of working, they were introduced to the fact that avant-garde artists have often faced the charge of being degenerate–hence our group’s name. The de(Generate) Spiral Workshop artists studied the historic Degenerate Art Show of 1937, in which Nazis gathered up the best Expressionist art of the era and displayed it to mock and cast shame on the artists. We learned that thousands of paintings were destroyed because of Hitler’s passion for creating a “new,” “pure” Germany by reclaiming his version of traditional culture and by repressing modern movements. We discussed why fascist regimes often target and repress the radical new ideas of artists, even when the artwork is not explicitly political. We concluded that art must have power and potential because those who seek total control, fear its influence on people.

Together we examined what it means to be a “degenerate” in our society today. We challenged the use of this term by exploring issues of taboo and censorship. We studied the work of David Wojnarowicz, one of the artists whose work was denied funding by the National Endowment for the Arts because it was deemed to be too controversial. We discussed whether controversial art should be permitted in a democratic society. In a final painting, each youth artist identified a personal experience of being repressed and shamed and then used the expressive power of painting to talk back to those who would silence them. 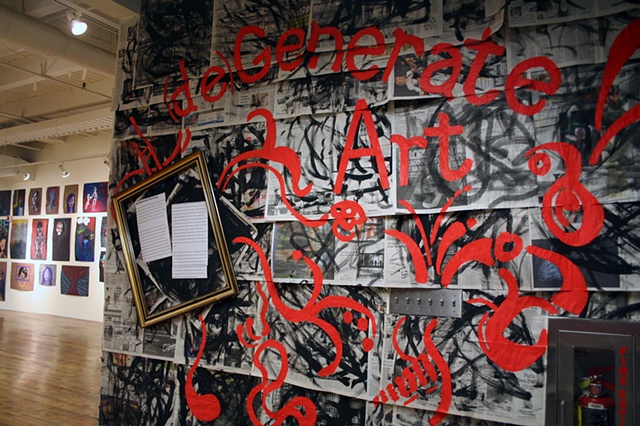